OR Firefighters Use Bailout System to Rescue Victim from Fire 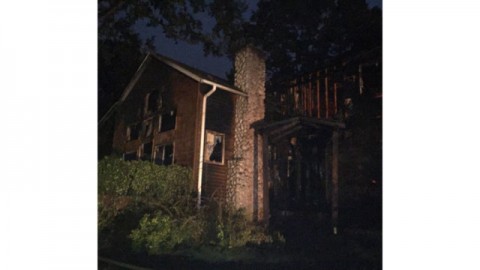 Clackamas firefighters used their personal escape systems to rescue a woman from an early morning house fire in Happy Valley.

Heavy fire engulfed the first floor when Clackamas Fire District 1 arrived at 3:46 a.m. Wednesday and were told that a woman was trapped on the second floor.

Two firefighters were able to find the stairway to and made their way to the second floor while intense heat drove two other firefighters back to the exterior, according a a press release from the department.

Firefighters recalled that the heat was so intense that it melted the carpet in the hallway.

Once they located the victim in a bedroom, they shut the door and radioed that they needed to evacuate through a window.

The second firefighter bailed out the window just as the room become engulfed in flames.

The woman was able to walk to the ambulance and was transported to the hospital, according to the release.

Firefighters brought the fire under control in 30 minutes.

The homeowner told Clackamas fire officials that a smoke alarm woke her up and that's how two occupants were able to escape.

By subscribing to our mailing list you will be updated with our products and training programs. We never spam.

We accept the following forms of payment: